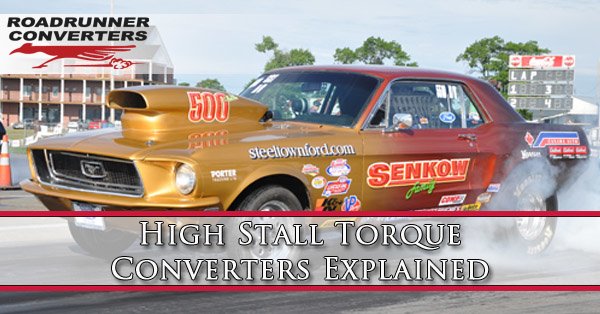 We will try to keep this short because high stall torque converters is a pretty involved subject. Stalling is when the torque converter locks up during a load. For instance, if you have a car that has a 2,500 RPM stall converter, and then you hold both gas and brake at the same time, like you were going to power brake, then general RPM that the tires will break loose at is going to be 2,500 RPM. If the converter has a stall of 3,500 RPM, then it would break loose at 3,500 RPM. You should keep in mind that if the same type of converter is in a big block that is in a car that is quite heavy or has serious traction, then the torque will drive the stall speed to a higher RPM, while an engine that has less power will do the opposite and it won’t stall the converter out as high. It is all due to torque, traction, rear gearing, and weight. It isn’t an exact science as far as finding the exact RPM stall.

Most stock cars will have between 1,000 – 1,400 RPM stalls. The reason that a stall converter works is easy. An engine that has 1200 RPM will only have about 80 horsepower, but at 2500 RPM it could be up to 200HP; obviously a car will launch easier at 200 HP than one at 80HP. Many performance engines will not have good horsepower until around 3000 RPM, which is why when you have higher HP engine with a large cam, you will need a higher stall speed so that it will be closer to the power band when it takes off, otherwise it will fail and start out slow.

There are some that believe that stall means that the car won’t move until the engine hits a certain RPM, that isn’t true. A car that has a 6000 RPM stall converter in gear and idling will roll along at about 10 MPH, just like any other car that is in gear with the brake off. Normally cruising into the pits, is done with the car idling and in gear. If a 6000 RPM converter means that the car doesn’t start moving until that RPM then the engine would need to be wound out just to hit 15 MPH, and that isn’t how it works. Stalling means that whenever the car is on the start line, and the trans brake is on, and you hit full throttle, the engine will rev up to 4500 RPM with the car sitting there, so whenever you slip that finger off the trans brake, and the tranny slips out of reverse, the car will launch at 4500 RPM, and a race motor at that RPM is close to hitting the peak torque curve when it leaves the line, which is why you get big wheelies or low 60ft times whenever the traction is good. Race engines will have no power at a low RPM, and will be shy on torque, so the nastier that the engine is, the higher the stall speed will need to be. Gear ratio, cubic inches, weight, and torque have a factor in this. This won’t get the flash effect whenever the stall converter will flash to when your finger comes off the trans brake. A normal 3000 RPM converter can flash up to around 5000 RPM once you have launched the car. It is a pretty complicated process, so I will keep it simple.

A 6000 RPM converter that is behind a stock engine may not go to 6000 RPM because the engine won’t make enough torque to get up to that point because of the load converter. The car will roll at a lower RPM and may never reach 6000 RPM. This is true for a 3000 RPM converter. Most mild race cars will use between 3500 to 4500 stall speeds on average. Faster cars will normally have a higher stall speed, especially in a smaller cubic inch engine that doesn’t have a lot of torque displacement. Plus, the higher the stall speed, the more heat the converter will make with hydraulic fluid inside of the converter. Normally a high stall converter will be able to make enough heat to destroy a transmission if you are holding the line too long at full RPM if the stall speed is higher than 3500RPM. Getting a tranny cooler is important for any high stall converter.

Many street performance cars will be running normal performance cam which should have a stall converter of 2800 to 3000 RPM.For the hotter cars that have bigger cams, then a 3500 RPM converter is better. If the car has a 350HP engine, then a 2400 RPM stall is best. The rule of thumb is if the engine is coming alive at 3500 RPM then you want a converter with about 3500 stall to it. Many people will tend to over cam and carburet their cars, and those people under stall which sucks. If you are needed a 3000 RPM stall, then they will get around 2000 RPM, which doesn’t get it off that starting line. You need to remember, 80% of the race is going to be the first 100ft. If you aren’t able to get off the line, then you will lose the race.